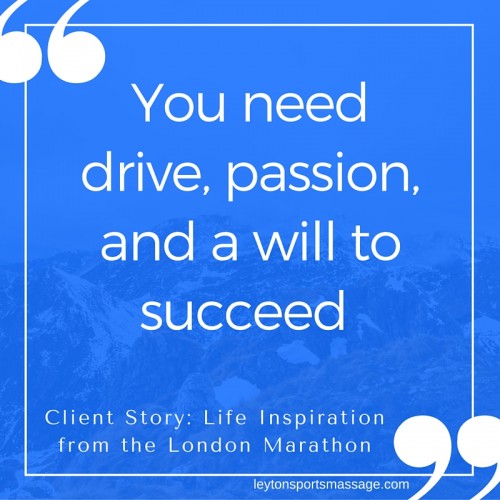 Jonathan (one of our longest-standing clients) not only managed to run two marathons (Paris and London) within three weeks of each other, but was able to do it despite an early setback with a hamstring injury last December. Working with him throughout his training, it was exciting to share his double marathon preparations.

If this sounds familiar, it is an adaption of a post originally found on the East London Runner’s facebook page, but it was just so good, I had to share it with you (with his permission of course!).

The story of human willpower and drive will inspire you to keep working towards your goals, whatever they are.

As you may know, I ran Paris on 3 April, and didn’t exactly come away best pleased, despite my PB (personal best).

London was going to go two ways, it was either tackle this head on, or continue to feel like I hadn’t recovered enough and make my excuses.

My game plan for taking on two races in this season begun back in the autumn when I was lucky enough to get an ELR (East London Runner) entry for London. Paris was always my banker. I often thought, and was asked, which one are you going for?

Saying what I thought I should say:

“Oh Paris is just a long run and I’m going for it in London.” That seemed to be right and many agreed with me.

I am such a novice at this, and listening to the experience of other club members is so important.

Everything was going so well, despite an early hamstring pull in the mud of Hainault Forest in late December. Three half-marathon races all at PB, and the Essex 20 debut, were leading to this going down as being a good year.

But I’m such a defeatist, and couldn’t help but think, when would the bubble burst?

Leading up to Paris, I felt really good.

Those pesky 2 mins and 46 seconds!

I should initially reflect on the experience of running two marathons in three weeks.

I know I am not unique in this situation this year, with many of us having a go at a double.

It took me two whole weeks after Paris to feel like I had the energy to run.

I struggled to get up in the morning, was tired at work, and just didn’t think I could do London after all.

Then, the third week: Wow, I suddenly felt good. Where was this coming from?

The news from Boston was coming in, I was hooked.

No, calm down, you need to do sub-3:25 for even a glimmer of hope of trip to Boston.

I had a score to settle with Paris.

I bumped into several people in the week before London.

A former boss, who I owe so much of my career to, he believed in me then, and he believed in me now. Then meeting Mark at the Expo who, having shared his thoughts with me, made me realise even the best runners feel like I do.

But no matter what you feel or do, only one thing counts, what is driving you?

You need drive, passion and a will to succeed.

If you want this, you can do it.

I shared with him my Boston dreams.

Knowing that anything more like a GFA was well out of reach. I’ll save that for later.

My rematch with Paris was on.

The day of the marathon, I have never felt so good for a race. That wasn’t a good sign.

I had a great night’s sleep, in fact I had several in the week before. I was chatting on the train and trying to relax. But everything was going well. As ever the train ride, the photos (yay I was in one this year) and the goodbyes were emotional. The sun was coming out and everyone was starting to feel better.

Could today really be the day?

I was starting to believe.

Unlike Paris, I had a really good starting pen.

I was with Spencer. Feeling out of my league, I let him wriggle to the front of the pen, while I hung back.

The pen began at the gates to Greenwich Park. Blimey this is like pole position.

Soon it was time for Tim Peak to announce our count down. Really? Surely that’s a recording but it was good anyway.

Then the fun began. Getting in the right pen is so important. I had it right. I was in a flow, I didn’t need to weave. I had room. There wasn’t much jostling.

Remembering the adage – ‘the first mile is a liar’ I tried to relax. But I was loving it.

I looked up, there was the 3:15 pacer. Surely not. This can’t be right. I decided that I had to go with how my legs felt, not his, but I wanted that push.

I edged forward to try and get in front of him.

I know …. In front! What was I thinking?

But I thought if I can’t see him it won’t bother me, seeing that gap ebb and flow while he’s in front just plays on my mind. Better not to know and keep just in front.

I kept with him until about mile 13 when I’m sure he just legged it. I’m trying to find his number to check his splits.

Soon after that I saw Mark (a different Mark) who looked comfortable. I slowly caught him and we chatted and ran together for a bit. I’ll remember his first words – “this is horrific”. But he looked and sounded quite relaxed.

I can’t talk at that pace AND run, so made my apologies. We ran along together for the next 4 or so miles and I think I guiltily left him about 17 miles in.

Once again, as with Paris, I was starting to fall apart at 18 miles.

Despite my usual fuelling strategy of a gel every 5 miles, I was flagging, and big time.

The wheels were coming off. 18, 19 miles. Come on. You need to find something to get you through to the 20 mile water station (where the ELR team organise and deliver the water for the runners).  They are going to be so happy and I don’t want to go thorough in pain or a shuffle.”

I needed that. Last year it was a bit of a flash. This year I think I took a bit more in. But it’s still a blur.

A hand slap from Alex and a bear hug from as many ELRs as I could grab at once. It was time to go. Grab a water bottle. Not sure who gave me that, but thank you so much. A quick spray in the air, and it was time to go.

The last 6 miles were the worst.

Was this a wall? Was this the dreaded second half? I was trying to compute what I had to do.

My watch had given me really duff info on my pace, and the distance covered. I think the GPS around the tall buildings of Canary Wharf did that.

So I was now just relying on the official clocks and a guess that 6×8 was still 48. I could just about scrape inside.

I was flagging. I wanted to walk.

My legs were screaming walk.

My head was saying Boston.

You are not walking.

The crowd will give you a hard time.

I was now in a place I’ve never been before.

This was the hardest I’ve ever run.

I had nothing left. I was stiffening up. The soles of my feet were hurting, the crowd were loud.

I wanted to hide. This was a really dark moment. When would it ever stop? The countdown had begun. One more park run to go. Come on.

My recollection of the next couple of miles is a blur. I don’t remember much.

Bridges and the most welcome of red arches.

I still had no idea what I had done.

My parents and friends were closely following my time, so I’d received a message before I’d even stopped my watch. I read my time. Have I done it?

In London 2016 for the first time ever in my life, I found willpower.

My willpower had won. An emotional wreck – but it was finally time to celebrate 2 marathons and 2 PBs in a month.

To Bernard who had put up with my training and lack of energy to work in the house, and for being my no 1 fan.

To all my club mates for the encouragement and motivation to believe in myself and who relentlessly inspire me.

To all my work colleagues in Team Finance.

To my besties Shailesh, Katherine, Mags and Ruel who patiently waited and cheered in the cold.

And to all the special ELRs who volunteered to make any of this possible. ‪#‎elrstrong 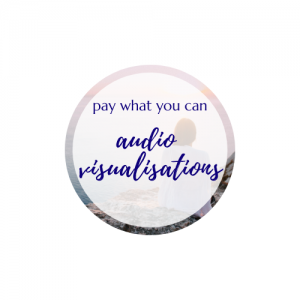 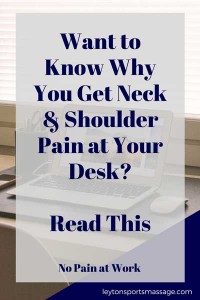 Want to Know Why You Get Neck & Shoulder Pain at Your Desk? Read This

Picture this: you’re typing furiously at your computer, working on an important deadline. You glance down at the clock and